One of the intimidating parts of learning Rust is to master all the basic container types:

The least we can say is that they are not really intuitive to use and they contribute to the steep Rust learning curve.

In this post we will focus on a specific use case for Trait Objects with the Builder Pattern. The goal is to highlight some of the differences between Box<T> (Heap allocated object) and Rc<T> (Reference Counting pointer), which are both very important container types you should master early on.

Box<T> is a container type designed to allocate and "hold" an object on the heap. It's the most simple form of allocation on the heap and the content is dropped when it goes out of scope.

Rc<T> (short for Reference Counting) is used when we want multiple methods using a read only reference thus providing with shared ownership over some content. It counts the uses of the reference pointing to the same piece of data on the heap. This ensures that when the last reference is dropped, the data itself will be dropped and the memory properly freed. 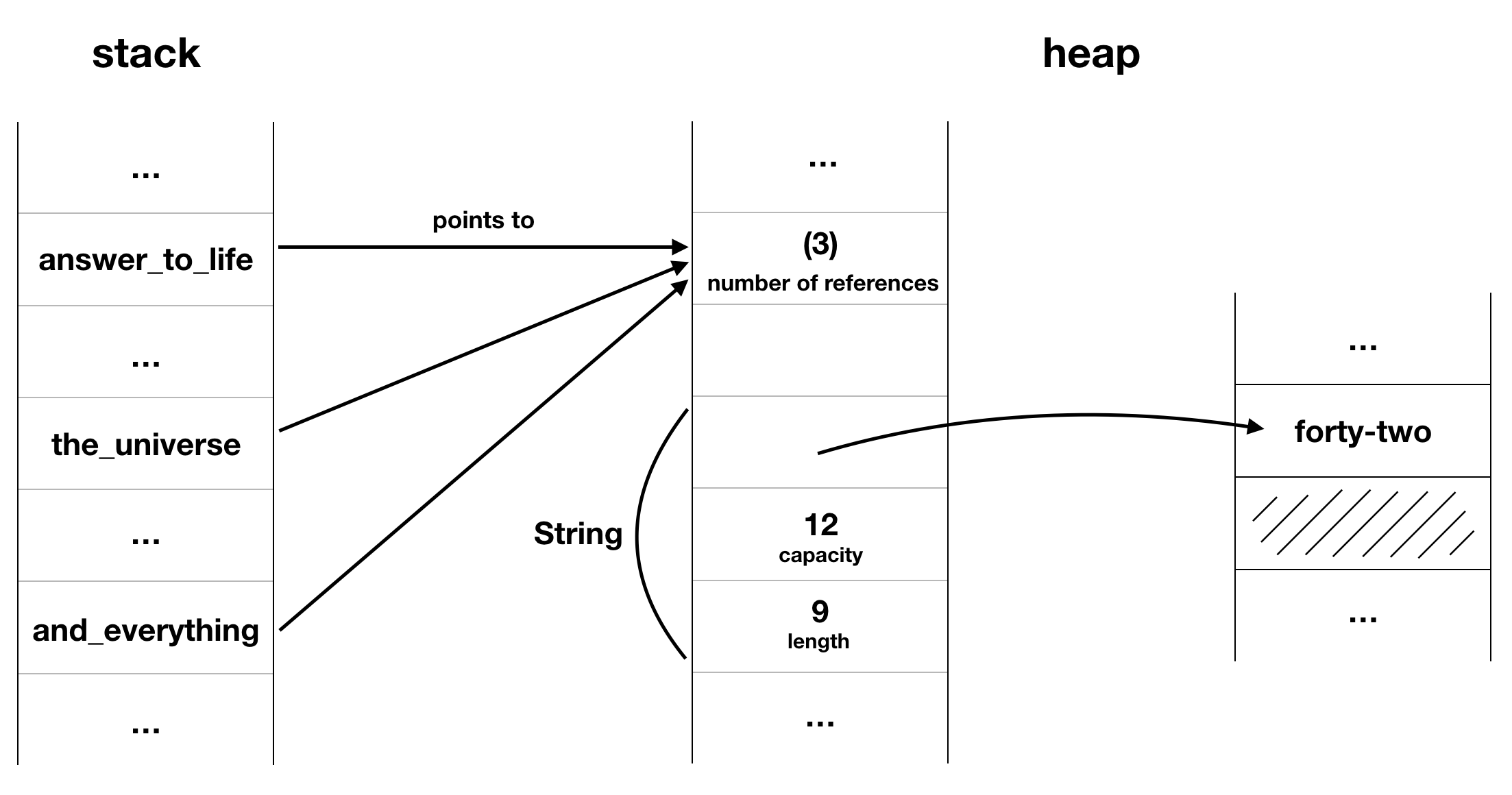 Note that you can't pass around an Rc between threads (not thread-safe), that's what Arc (Atomic Reference Count) is for.

Whether you use a Box<T> or an Rc<T>, the Box or Rc itself is on the stack, but the data they "contain" lives on the heap.

In short, Box and Rc are nothing else than references (pointers) to objects stored on the heap. One provides shared ownership, the other doesn't.

A Trait Object represents a pointer to some concrete type that implements a Trait (think interface if you are unfamiliar with the term Trait).

Much like polymorphism, they use a mechanism to determine which version actually runs through a virtual table dispatching to the right implementation (unsurprisingly called dynamic dispatch). This is achieved by using basic pointers types like &, Box<T>, Rc<T> (or Arc<T>).

To sum up, once we have a pointer to something that implements a Trait, we have a Trait Object.

Let's pick up a specific use case to explain one usage of Trait Objects. We assume that we are heavy users of docker and rkt and want a common interface (Trait) to run containers.

We can have multiple implementations of the Engine trait, let's say with Docker:

You get the picture: same goes for Rkt that will have its own implementation of the Engine Trait . This is satisfying for now, let's jump to the Server.

For the purpose of running our program, we also want a common Server object holding our various configuration options and our Engine Trait implementation:

For convenience, we want to use the builder pattern to instantiate an immutable version of the Server object. How it works is that we initially create an empty mutable Server object and then populate fields using init_*() methods. Let's start with a skeleton:

Creating our Server instance will thus be as simple as:

In the end, we get back an immutable reference to a Server with the build method. This same build method takes the mutable version of the Server to create a new immutable Server from its content.

Note: We need to use clone() in the build method for the engine to move ownership of the Engine Trait implementation to the new immutable Server. Rust is very strict about ownership of content!

Now back to the Server type and a question should cross our mind:

We can't use a standalone Engine because it would point to the stack and trait objects might have various sizes (depending on the implementation we point to). To guarantee memory safety, Rust must know the size and alignment of things it manipulates. If we tried to do so, our code would be filled with errors like this one:

Because Trait Objects are Dynamically Sized Types, we could use special pointer types to the heap to circumvent this requirement, thus the reason of this topic on Box<T> and Rc<T>.

As well put up in the Rust documentation:

Considering this, would allocating the object on the heap using the Box<T> container type help in this case? We know that a Trait Object is basically a pointer to something implementing a Trait. Box<T> seems to fit the bill.

Let's try by wrapping our Engine in a Box type like the following:

We can use it to initialize our Server object and fill our initial skeleton:

Let's check if this compiles:

The reason why the code above fails is that even though Box holds the trait implementation on the heap, using clone on a Box copies the object rather than a fat pointer to it. That's why the compiler says that our objects must be Sized if we want to use the clone method. We can't copy something if we don't know its size!

In this example, Engine is a Dynamically Sized Type thus it is Unsized, it does not respect the Sized Trait bound required for clone to work. The error makes sense, let's try to find out more about this looking at the Rc<T> container type.

Wrapping a Trait object with Rc

That's where Rc comes into play. Rc, unlike Box, does not copy the whole context and data when calling clone, it only copies and hands-off a reference to the object on the heap, the "fat pointer" with the virtual table pointing to the right Trait implementation.

On top of that, this highlights a main difference between Box and Rc:

In short: Box<T> copies values, Rc<T> clones references and keeps track of references in use.

Now that we've highlighted the difference between Box<T> and Rc<T> regarding their relationship to the clone method and the link to Trait Objects, let's finally switch from using Box<T> to using Rc<T> instead:

This should compile successfully. Indeed in the build method, we only clone a reference to the Engine implementation, not the actual implementation itself.

If this sounds confusing, just remember that Rc only copies a reference to the object, and because the content in Rc is immutable: there is no risk of data race and multiple owners modifying the object at the same time. That's why we mentioned that Rust was very strict about ownership: it wouldn't allow us to pass around a mutable reference to the Engine implementation.

In init_engine we can now override the default Engine to spin-up our containers.

This post was just about Box and Rc usage with Trait Objects, but remember that you can always mix and match container types to achieve particular goals. For example:

Bookmark this cheat sheet or this periodic table of Rust types, these are incredibly useful resources.