In the Docker networking model, every container belongs to the same private network managed by the Docker daemon. Containers are not visible to the outside world and you need to configure port mappings and/or links.

To run a cluster across VMs with this model, we would need to expose ports necessary for containers in order to communicate with the outside world. With docker this would be using docker run -p <container-port>:<host-port> extensively for each service we want to expose.

Still, in the case of a software like Scalaris, a distributed key/value store: You can run many nodes on one host/container. Keeping track of each exposed port would thus be a nightmare as you need to manually micro manage a given range of ports for all the containers (and the nodes inside them) running Scalaris. Shut down or create instances implies to always update which port is used to allow nodes to use them consistently without colliding with each other.

As always, you are adding your own layer of complexity on top of an already complex architectural model.

The main issue about using containers is to change our way to work by using links and exposing ports the way we are told to. This is far from being intuitive, a lot of newcomers to Docker are struggling with the complex networking model. Sharing a common topology allowing us to manage our application instances the same way we do it on bare-metal machines is essential for simplicity, maintenance and consistency at large scale.

For this, a project called Weave comes to the rescue.

Weave creates a Virtual network that connects our Docker containers together. No need to link our containers and micro manage our ports: here, containers can see each other if they are on the same Weave (Virtual) network.

Promises are great, but let's see it in action.

For this, we will focus on trying to run Scalaris nodes in Docker containers. Containers are located on different hosts over the network. It could be different VMs across a single machine, across different datacenter regions but even across entirely different Cloud providers.

First, what the hell is Scalaris?

Scalaris is a good candidate to test Weave as it is a Peer to Peer network with a Chord overlay (to simplify).

You probably never heard about Scalaris before. This might be because of its Academic roots. It originated from the Zuse Institute in Berlin and is still actively maintained.

To give you a small sneak peek: Scalaris is a Peer to Peer in-memory Key-Value Store. It is written in Erlang and has many bindings from Java to Python. The network overlay is composed of a Chord ring, a well known topology in Peer to Peer software. It uses a slightly modified version of Paxos for leader election. And obviously you can store your Key/Value pairs which are replicated through the ring on a given number of peers. It supports (N/2)-1 failures. Compared to other key/value stores, Scalaris provides strong data consistency and support for transactions.

Scalaris is great in the sense that it just works. You create your ring of peers and you can feed the cluster with more nodes to cope with the demand very easily. No extensive administration tasks needed (unless you use containers!).

A feature often critiziced by the community is that in Scalaris, the data is not persisted. Everything is in memory. If your network goes down you are left with.. nothing. But this is by design, a Scalaris cluster is not meant to go down. It should always run.

Well known equivalents are Riak (Peer to Peer but document-oriented) and etcd.

How this could be used

This could be used to manage a cluster of docker containers by managing service discovery or handling cluster metadata management. Typically I wanted to evaluate other mature Key/Value stores similar to etcd or Consul, which are used in many Cloud Platform experiments based on Docker.

Back to our Task

We are going to run a Scalaris Cluster within Docker Containers disseminated over staticically IP provisionned VMs for local experimentation.

What is our roadmap for this task?

For this task you'll need to install on your machine:

Create a test folder and clone the git repository:

Nothing special here. VMs are provisionned from an Ubuntu Trusty image. We install dependencies (Docker and Weave) via a script.

Open three terminals and ssh into these hosts:

You can jump straight to the next part if you are not interested in the Docker image creation process.

On each virtual machine, we are going to use the image abronan/scalaris-weave.

The Dockerfile for this image is below:

It is quite dense for a Dockerfile (not optimized) but it does nothing too fancy:

So far so good.

The Supervisor configuration file is below:

It includes informations about the processes we need to supervise, here sshd and scalaris. However, instead of launching scalaris directly, we use a script called scalaris-run.sh (alternatively we launch an Erlang prompt on localhost as a foreground process)

The container is parameterized by setting environment variables to docker run at launch. The script launched for the CMD directive is the one below:

Now that we explained the image creation process, let's pull the Scalaris image for our experiment. On each host, type:

The image is heavy and this might take some time. Go grab a coffee in the meantime.

Now that we have prepared everything, let's run our Scalaris cluster for good. We need to initialize the Weave network on each host.

With these command lines, we tell each host to start a Weave router. The router runs in its own container (zettio/weave) and is on the 10.2.0.0/16 address space.

After having launched the weave network on the same address space on host0, host1 and host2, this is time to run our Scalaris containers. We give to each container an address on a subnet of the Weave network (in this example we use 10.2.1.0/24).

You might be surprised that we create our containers with the command weave run and not docker run. This is because weave invokes docker run itself (I put the -d flag for convenience and understanding but weave actually calls docker run -d).

Note that we still map the port 8000 to the one of the host, using the -p flag. Even though our cluster runs in its own network, we still need to map the port of the web interface to be accessible from the host for our local experiment.

And really, that's it. Nothing more than two simple commands on our hosts and the virtual network is set for the our containers. Theoretically, they can now communicate with each other and they should be able to build the Chord ring. Let's check that.

We can now access the Scalaris Dashboard to monitor the state of the cluster through those addresses: 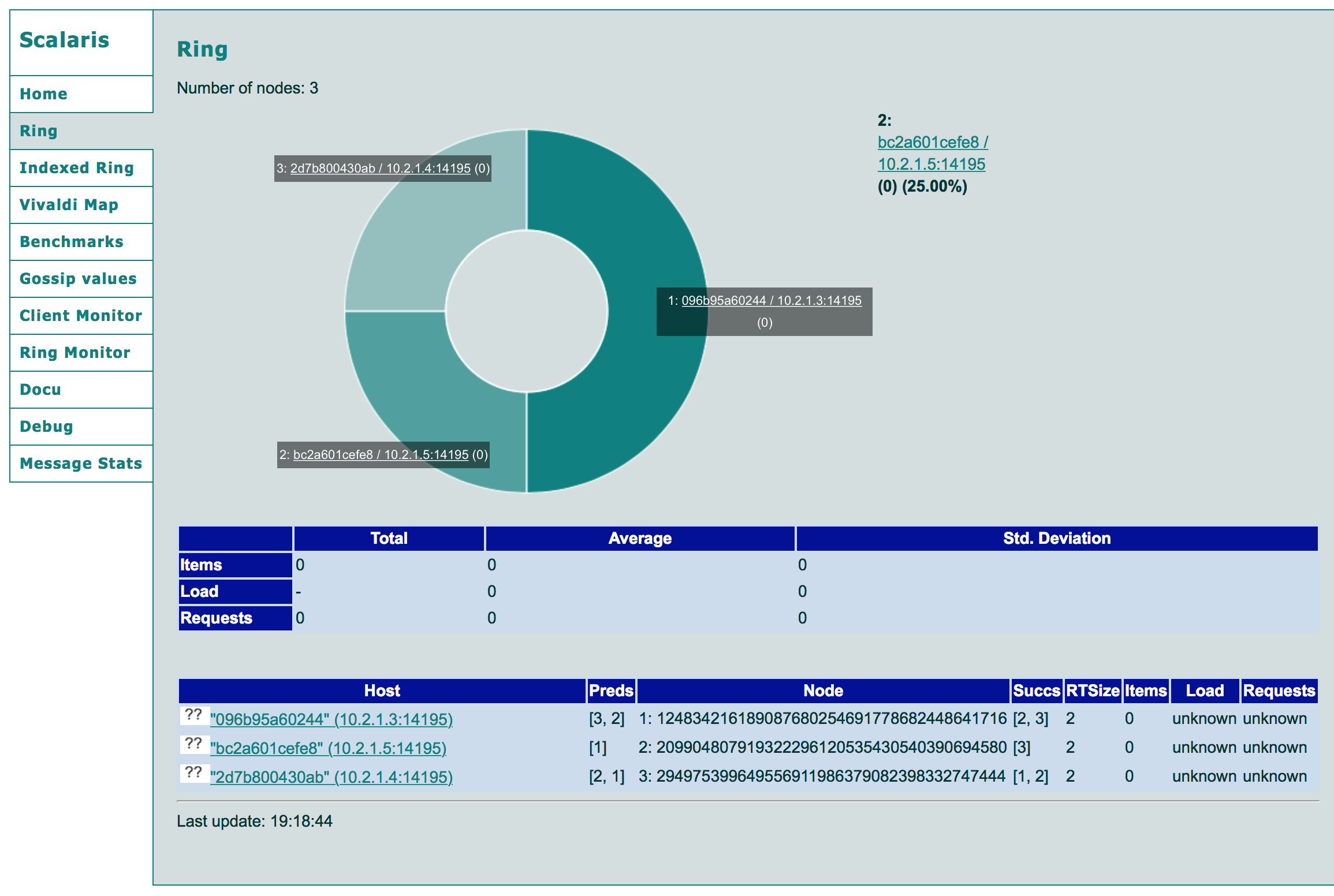 You can test the cluster by adding some Key/Value pairs. It works!

Weave allows us to use application containers in a distributed fashion accross machines and networks, managing them as if they were bare-metal hosts. I choosed Scalaris but you can run anything with Weave: Riak, Cassandra or whatever. Weave blog categorizes use cases among which one is dedicated to Cassandra (This article gave me the curiosity to test it with Scalaris, go read it!).

No doubt that this is a huge step forward for the Docker community. While Docker is a great building block for the Cloud, the community brings many new tools. This makes Docker even more appealing for industrial use cases.

Weave is one of those tools which makes our life easier. It brings the flexibility needed to create consistent architectures by avoiding Docker's convoluted networking model.

The near future sounds very good for Docker: We'll see it coupled to Weave, Flocker (Management of Data containers) or even Criu (Live migration) in order to leverage fully-resilient architectures with minimal administration overhead.